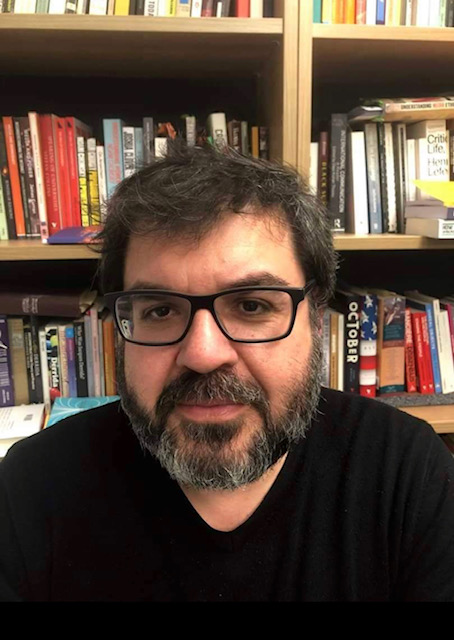 I am interested in media theory and post-1850s literary history and theory, with a focus on politics, feminism, and the philosophy of media (media ethics, digital ontology, loss, mourning). I am also interested in the intellectual and socio-cultural reception of Ancient Greek texts (mainly philosophy and drama).

I endeavour to engage students by highlighting the ways in which theory – whether we talk about media, literature, politics or indeed philosophy – bears heavily on the culture in which we live and which we consume daily, as well as on the articulation and implementation of political decisions that materially influence our lives.

To do so, I rely heavily on twentieth-century continental theory whilst drawing on a diverse array of primary sources (especially from popular culture) and/or media texts mined from an equally diverse spectrum of media platforms: from legacy media to social media platforms and social networking sites.

I try to inculcate my students with a respect for the value of abstract thinking in practical, everyday life, and with a belief in the emancipatory potential of critical engagement and creative thinking. My two expectations from students are that they are a) conscientious, and b) intellectually daring.

My background is in literary and critical theory. I started my teaching career in the School of English at the University of Sussex, where I worked as a teaching fellow since the completion of my doctorate in 2005.

My doctoral thesis explored Virginia Woolf’s classical Greek influences and the ways in which she solidified what I call a ‘poetics of loss,’ by navigating the post-1850s phenomenon of British Hellenism. My thesis was reworked into a monograph entitled Hellenism and Loss in the Work of Virginia Woolf (2011), the first (and hitherto only) book-length study of the author’s relationship with what she called her ‘dead Greeks.’

At Sussex, my teaching and research expertise lay mainly in post-1860s British literature and culture (especially Anglo-American and European modernisms, focusing particularly on the work of Virginia Woolf), in 20th-century constructions of sexuality (especially in representations of same-sex desire in post-1850s British literature and culture), and in genre theory (focusing especially on the theory of the novel).

My teaching and research interests took a decidedly material turn following the global financial crisis of 2007/8 and, especially, during the sovereign debt crisis in Greece post-2009. Since coming to the University of Brighton in 2010, I have sought to explore the ways in which the media – broadly conceptualized – perpetuate existing social, cultural and, mainly, political hegemonies whilst opening up avenues capable of accommodating a resistant socio-political imaginary predicated on egalitarianism, collective effort and justice.

I have reviewed published books or manuscripts/proposals for publishers such as Sage and Ohio University Press, and for academic journals such as Feminist Media Studies, Men and Masculinities, Convergence, Tulsa Studies in Women’s Literature, Contemporary Women’s Writing, and the Classical Review.

*For conference attendance and related scholarly engagements see 'activities' below.

Antigone and its context: Review of (D.) Stuttard (ed.) Looking at Antigone

Neither Sensible, Nor Moderate: Revisiting the Antigone

Online misogyny and the alternative right: debating the undebatable

'"To be is to Inherit": The Concept of Labour and the Political Ontology of Woolf's Archive'

‘Mourning to fail, failing to mourn: a Derridean Approach to the Archivology of Mourning on Digital Media’