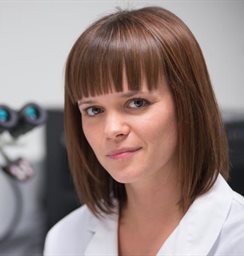 Lorna Linch is a Principal Lecturer in Earth Science within the School of Environment and Technology (SET). Lorna’s teaching and research interests are glacial processes, cold climate geomorphology, sedimentology, micromorphology and Quaternary Environments.

Lorna studied for a BSc. (Hons) in Physical Geography at the University of Reading (2001-2004). She returned to academia to embark on a PhD (funded by the Natural Environment Research Council) in Physical Geography at Queen Mary University of London (2006-2010). Following this, Lorna undertook a Postgraduate Certificate in Higher Education (Fellow of the Higher Education Academy) at the London School of Economics and Political Science (2010-2012) before joining the University of Brighton in November 2012.

Lorna has published papers in several high-impact, international, peer- reviewed journals in which she presents, for the first time, a novel conceptual model illustrating the style and intensity of sediment deformation by iceberg-keel scouring in variable grain sizes. In addition, Lorna has presented her multidisciplinary research (and lead- and co-convened sessions) at many national and international conferences, workshops and research seminars such as the Arctic Science Meeting, European Geosciences Union General Assembly, Ice Scour and Arctic Marine Pipelines workshop, International Conference on Permafrost, International Glaciological Society British Branch Meeting, International Micromorphology Symposium and the INQUA (International Union for Quaternary Research) Congress. Lorna continues to develop her international profile through roles such as journal peer reviewer; Editor for INQUA’s Quaternary Perspectives (2013-2016); as an Advisory Board Member of INQUA’s TERPRO (Terrestrial Processes, Deposits and History) Commission (2015-present); and as an Editorial Board Member for the international open access journal Open Quaternary (2018-present).

Lorna is also the elected Coordinator of the University’s Past Human and Environment Dynamics (PHED) Research and Enterprise (R&E) Group (2017-present). As part of this role she is responsible for guiding the strategic development of the group, through research and enterprise action planning. In addition, Lorna is the pioneer and Editor-in-Chief of eGG - the e-journal of undergraduate research in Environment (e), Geography (G) and Geology (G) in the School of Environment and Technology (SET). As part of eGG’s ongoing development Lorna is leading pedagogic research in collaboration with the University’s Centre for Learning and Teaching, investigating the benefits, initiation and development of undergraduate research journals.

Finally, Lorna is (i) an elected member of the SET Research & Enterprise Committee 2014-present (which aims to increase collectively SET’s research profile); and (ii) an elected member of the School Quality and Standards Committee 2017-present (ensuring course quality and academic standards). In the past Lorna has also been (i) a member of the SET Athena Swan Charter Group 2013-16 (to address gender equality in Science, Technology, Engineering, Mathematics & Medicine); and (ii) representative for the SET Research Ethics and Governance Committee 2013-16 (to maintain high ethical standards in research).

Lorna is the elected Course Leader of the BSc. (Hons) Physical Geography and Geology Course. She is involved in teaching several modules for both Geography and Geology courses at all undergraduate and Master’s levels, specialising in (1) Cold Environments (the ‘The Frozen Planet’ module); and (2) Sedimentology (the ‘Palaeoenvironments’ module). Lorna is also a supervisor to undergraduate dissertation students and she has lead-supervised two University-funded PhD projects.

With a PGcertHE and as a Fellow of the HEA (Higher Education Academy) Lorna values the importance of continually developing her teaching practice (including course design and curriculum development) for the benefit of her students. She enjoys getting student feedback and considering ways to support a variety of student learning approaches. Above all, it is Lorna’s primary objective to engage with students, and she does this by using a variety of interactive techniques in lectures and practical classes, such as videos, Q&As, quizzes, pair work etc., as well as through personal tutorials.

Lorna also places great value on providing undergraduates with a chance to publish their research. That is why she is the pioneer and Editor-in-Chief of eGG: the e-journal of undergraduate research in Environment, Geography and Geology. Finally, Lorna is an active STEMM (Science, Technology, Engineering, Mathematics & Medicine) Sussex ambassador, fostering links with secondary schools, and taking part in outreach events - such as the Big Bang South East - to encourage 9-18 year old students to follow a career in Geology, Geography, Environmental Science and research.

Lorna has played a key role in the conception, design and delivery of several collaborative research projects and she has been awarded research grants totalling approximately £45K. Lorna has been Principal Investigator (PI) on projects investigating: (1) iceberg-keel scouring in Antarctica, Canada, Greenland, The North Sea and Sweden; (2) the deglacial history of the Khibiny Mountains in Arctic Russia; and (3) mapping and quantifying sedimentary and geological structures using the Metripol microscopic method. As PI she is currently preparing projects in: (1) protecting Arctic marine pipelines from ice keel scour; and (2) recognising and characterising fast ice flow in glacial till. In addition, Lorna is involved with other projects such as glacial reconstruction in central Ireland. Lorna has also been lead supervisor on a University-funded PhD project examining periglacial ramparted depressions, and she is currently leading a second University-funded PhD project investigating deglaciation of the Kola Peninsula in Arctic Russia.

As part of these projects Lorna collaborates with some of the world’s most highly esteemed Quaternary, glacial and sedimentology scientists from institutions such as the British Antarctic Survey, the British Geological Survey, Brock University (Canada), Brunel University, C-CORE Research & Development (Canada), the Kola Science Centre (Russia), Manchester Metropolitan University, the National University of Singapore, Queen Mary University of London, the Scott Polar Research Institute (University of Cambridge), and the Universities of Aberdeen, Hertfordshire and Stockholm.

I am interested in supervising postgraduate research students in the following areas: ice(berg)-keel scouring, glacial/periglacial geomorphology and sedimentology, micromorphology and reconstructing cold environments.

The London School of Economics and Political Science