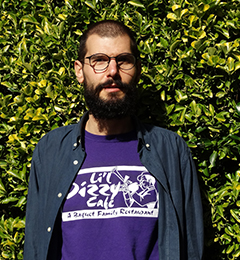 Dr. Lambros Fatsis is Lecturer in Criminology within the School of Applied Social Science (SASS) at the University of Brighton, and a Fellow of the Higher Education Academy (FHEA).

Lambros' research interests revolve around a critique of dominant interpretations and public perceptions of the public sphere, culture, and intellectual life, the criminalisation of Black music (sub)cultures, and police racism. He is particularly interested in how certain forms of public expression and creativity are not only marginalised in the relevant academic literature, but also criminalised by law enforcement agencies.

His current research focuses on the criminalisation of Black music subcultures such as UK grime and drill through a host of unfair and illegitimate police practices. He is also interested in the political significance of deviance/ “deviant (sub)cultures”, and also specialises in the history of institutional racism in the UK with a particular emphasis on policing.

Parts of his research have been published at the Crime, Media, Culture journal, and The Sociological Review, and the European Journal of Social Theory, and he is currently completing a book with Mark Carrigan on public sociology and social media for Bristol University Press. Lambros’ work is also featured in non-academic publications that include three short stories for the So-Fi sociological fiction zine and a long Introduction that he was commissioned to write for the Greek edition of A History of Seven Killings by the 2015 Man Booker Prize winner Marlon James.

Lambros regularly provides expertise on debates around citizenship, public intellectual life, and the policing of Black music subcultures to a variety of print and online media and international policy-making organisations that include: The Sociological Review blog, the European Politics and Policy (EUROPP) blog of the LSE, the British Society of Criminology blog, The Conversation, Huffington Post,the prestigious Greek daily I Kathimerini, the prominent Brazilian newspaper O Globo, and the Getulio Vargas Foundation (FGV) in Rio de Janeiro, Brazil.

In January 2019, he was announced as the winner of the first-ever ‘British Society of Criminology Blogger of the Year Award’.

I would be delighted to receive proposals for doctoral studies in my areas of expertise as listed below:

Policing the beats: The criminalisation of UK drill and grime music by the London Metropolitan Police

Grime: Criminal subculture or public counterculture? A critical investigation into the criminalization of Black musical subcultures in the UK

Open Access
File
intellectual
conscience
appeal
sociology
elite
Your message has successfully been sent.
Your message was not sent due to an error.
If you made any changes in Pure these will be visible here soon.